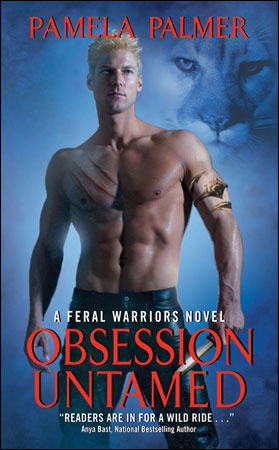 Every time she closes her eyes, Delaney Randall suffers another nightmare. A brutal serial killer has found his way inside the tough, take-no-prisoners FBI agent’s head. Now she lives the murders through his eyes, from his deadly approach, to his victims’ screams. Until the night he breaks into her apartment and she fears she’s going to be the next to die. But the man who snatches Delaney from her home isn’t the murderer. He’s Tighe, a dangerous Feral Warrior who needs her and her visions to stop the rampages of a creature as inhuman as he is evil. Tighe has little use for humans, but as he and Delaney join forces to track the dark fiend, he falls for the intense beauty and becomes wild with an obsession as untamed as his heart.

The Feral Warriors were in a world of hurt.

Tighe lifted his face to the night wind, trying to cool the frustration lodged beneath the surface of his skin as he traversed the rugged, rocky woods high above the Potomac River.

The Mage had lost their freaking minds and were apparently trying to free the Daemons. After sacrificing so much five millennia ago to imprison them, Tighe couldn’t fathom why, but there was no denying at least one Mage, the witch Zaphene, had been determined to free Satanan. Zaphene was dead, but she’d left a hell of a legacy.

One of the Ferals, Vhyper, was missing. The Daemon Blade itself was gone. And one of Zaphene’s creations had run off with half of Tighe’s soul. Literally.

Where the Mage witch had come by the magic to split souls, no one knew, but she’d done so to make clones of the Ferals. Clones who would raise the Daemons from the blade in the real Ferals’ stead, since the real Ferals weren’t stupid enough to want that plague freed again. What were the Mage thinking?

A growl rumbled deep in his throat as he climbed the last of the stone outcroppings onto the cliffs above the river. The night was clear, the brightest stars little more than a dull glow, thanks to the damned humans and their incessant need to battle back the dark.

His clone was, by all indications, currently wreaking havoc on the human population. Tighe and two other Ferals had been tracking him for three days as he’d left a path of dead between Great Falls, Virginia and nearby Washington, D.C.

And while, yes, the clone’s deadly rampage needed to be stopped, Tighe’s stake in his capture was a lot more personal. He needed his damned soul back. No one knew for sure how long he could survive with it split like this, but the consensus was, not long. At least not with his sanity intact.

Obsession Untamed is a finalist for the Gayle Wilson Award of Excellence. (posted March 2010)

Obsession Untamed goes in for a second printing! (posted November 2009)

Listen in on a podcast where Pamela Palmer talks about the Feral Warriors trilogy on Romance Radio. (posted August 2009)

There's a scene in Obsession Untamed where Tighe and Delaney track the villain to the Lincoln Memorial in Washington, D.C. It's one of the most recognizable attractions in the Nation's Capital, so you've probably seen pictures, if you haven't actually visited it yourself. But here are some pics I took during a recent visit! 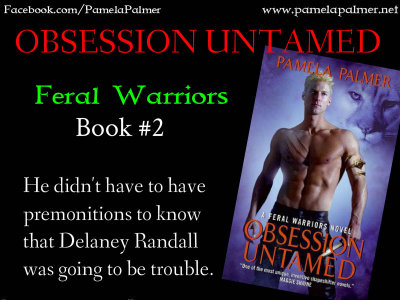 “Obsession Untamed is the second book of this new dynamic series and I am totally addicted. The feral warriors are all charismatic and hunky men that leave the reader begging for more.”

“Ms. Palmer continues her story line with a fast-paced chase and the intriguing characters she so deftly brings to life. Obsession Untamed has the well-plotted strength to stand on its own, but will no doubt leave fans eager for the next installment in this entertaining series.”

“Another intriguing addition to this incredible paranormal series. Obsession Untamed is the second book in this exciting new Feral Warrior series. This installment has intriguingly passionate characters and the continuing storyline has enough intrigue and action to keep me from putting the book down. An awesome series!”

“Pamela Palmer is fast becoming my absolute favorite in the world of paranormal romance. I am waiting with bated breath for each new installment to this series! Her Feral Warriors are climbing right into my heart.”