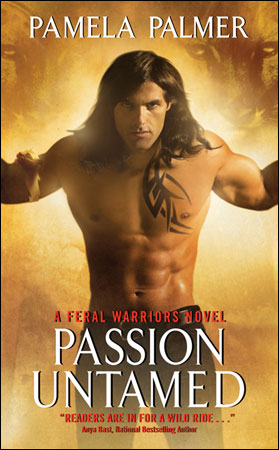 Though the Mage witch Skye has a gentle heart, demonic forces have enslaved her, forcing her to kidnap Paenther, a powerful and dangerous Feral Warrior. Even chained and naked, Paenther is a cunning prisoner who seduces her, body and soul, turning captive into captor. Paenther’s pride demands revenge against the enchantress who emerged from the deep woods like a sensual vision and enthralled him, even as she makes his body burn with passion. Despite his fury over her treachery, Skye’s gentle beauty calls to his soul, calming the wild chaos within him, and stealing his heart. But when evil threatens, Paenther and Skye’s only chance at survival is to trust in one another…and the power of love.

Paenther fought his way back to consciousness like a man hacking a path through a fog-shrouded jungle. Little by little, he parted the misty enchantment that encased his brain, impressions flying at him through his senses. Cold, rough stone dug into the bare flesh of his back as he lay with his arms pulled taut above his head. He flexed his muscles and tried to move, but harsh metal bit into his wrists as the sound of chains clanked against the rock.

Icy disbelief clawed through his mind. His pulse began to race.

He was chained. Naked.

Finally, finally, his vision tore free of the enchantment. His eyes snapped open and he stared around him at the unlikely sight. He was alone.

High above him, dozens of dagger-like stalactites dripped from the roof. Floating around them were small flames encased in luminescent bubbles. A sight he hadn’t seen since Ancreta’s dungeon. A sight that filled him with cold dread.

He fought against his bonds in furious desperation as he struggled to remember what had happened.

The beauty. Innocence and wisdom shining from eyes the color of a summer sky. He’d buried himself inside her and found a passion and release more intense, more incredible, than any he’d ever known. Until, at that moment of raging perfection, she’d revealed herself to be Mage and he’d felt the net of enchantment snare his mind.

The memory stopped his breath, cramping his guts. For the second time in his life, he’d been captured by a Mage witch.

Passion Untamed is an Award of Merit recipient in the Paranormal category of the HOLT Medallion contest. (posted August 2010)

Passion Untamed goes back for a third printing! (posted November 2009)

Listen in on a podcast where Pamela Palmer talks about the Feral Warriors trilogy on Romance Radio. (posted August 2009)

As I started plotting Passion Untamed, I began to think about where the Mage might be holding Paenther. At first, I envisioned the basement of a large house, something similar to the Ferals' own prisons. But that answer didn't resonate with me. I wanted something different. And I mean different. It just so happened that these thoughts were going through my head on a family trip down I-81 in the Blue Ridge Mountains of Virginia. We passed a billboard advertising Dixie Caverns and my husband, who'd been there before, said, "One of these days, I'm going to have to take you there. You'd like it." My reply? "How about today?" I'd found my answer. The Dixie Caverns are far smaller than their Mage counterparts, but the eerie feeling of being deep underground inspired scenes that haunt me, even now. 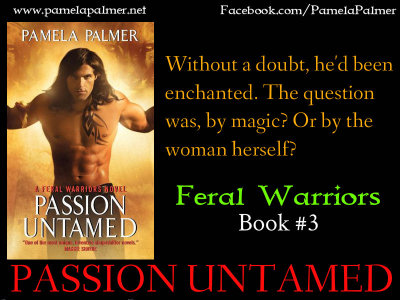 “Passion Untamed is spellbinding, captivating, and uniquely original in a world of repetitive paranormals. Pamela Palmer has drawn me into this
seductive world of shape-shifters and their battle between good and evil,
that I honestly cannot get enough of.”

“What a dark and powerful story! Edgy, dark and riveting. A must read for paranormal fans. Reviewer Top Pick!”

“From the instant you enter into the world of the Feral Warriors, their hopes and dreams become yours.” 5 STARS!

“A wonderful story of magic and romance that easily captures the attention and keeps it until the final scene.”

“Passion Untamed is as hot and sexy as the title suggests. The intrigue and characters in this series are absolutely incredible.”

“This latest Feral Warriors novel is filled with the same intrigue and passion as the others… sure to keep you reading.”