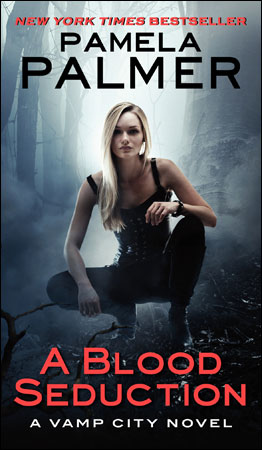 Book One in Vamp City Series

Vampires live only for lust and pleasure in the eternal twilight of Vamp City. But the city’s magic is dying. The only person who can restore it? A beautiful woman from the mortal world…one who knows nothing of the power she wields.

Quinn Lennox is searching for a missing friend when she stumbles into a dark otherworld that only she can see–and finds herself at the mercy of Arturo Mazza, a dangerously handsome vampire whose wicked kiss will save her, enslave her, bewitch her, and betray her. What Arturo can’t do is forget about her–any more than Quinn can control her own feelings for him. Neither one can let desire get in the way of their mission–his to save his people, hers to save herself. But there is no escape from desire in a city built for seduction, where passion flows hot and blood-red. Welcome to Vamp City… 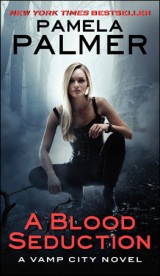 Perched on her stool in the chilly lab of the Clinical Center of the National Institutes of Health in Bethesda, Maryland, Quinn Lennox studied the lab results on the desk in front of her. Dammit. Just like all the others, this one revealed nothing out of the ordinary. Nothing. She’d run every blood test known to science and they all claimed the patient was disgustingly healthy. Utterly normal.

The patient wasn’t normal and never had been and she wanted to know why. She wanted to be able to point to some crazy number on one of the myriad of blood tests and say, “There. That’s it. That’s the reason my life is so screwed up.”

Because those lab tests were hers.

At the sound of her boss’s voice in the lab doorway, Quinn jumped guiltily. If anyone found out she’d been using the lab’s equipment to run blood tests on herself she’d be fired on the spot. She set the lab report on her desk, resisting the urge to turn the paper over or slip it in her desk, and forced herself to meet Jennifer’s gaze with a questioning one of her own.

“Did you have time to run the McCluny tests?” Jennifer was a round woman, over forty, with a big heart and a driving need to save the world.

“Of course,” Quinn replied with a smile. “They’re on your desk.” She might be running tests she shouldn’t be, but never, ever at the expense of someone else’s.

“Excellent.” Jennifer grinned. “I wish I could clone you, Quinn.”

Quinn stifled a groan at the thought. “One of me is more than enough.” Certainly more than she could handle.

When I first conceived of the idea of the Vamp City story, I wasn't certain where I wanted to set it. All I knew was that Vamp City was a vampire utopia set in some kind of otherworld. Since my other series (the Feral Warriors and the Esri) are both set in the D.C. area (where I live), I thought I'd do something different this time.

I briefly considered setting it in the clouds, a true 'otherworld', but I did that with the Ilinas in the Feral Warriors series. Then I thought about the places I have easy access to for research purposes. Since I have family in Florida, I thought about setting it in the water off the Gulf Coast. But I immediately pictured the Little Mermaid and discarded that idea as quickly as it formed. Besides, what would I name the place? Waterworld? Nah, that's already been done. And I'd already kind of settled on the name Vamp City.

So, I thought about D.C. again and about whether I could do something entirely different in my usual stomping ground. I knew I'd hit pay dirt when three things happened simultaneously. 1) A picture popped into my head, a Civil War picture of the partially-built Washington Monument, a picture that's always fascinated me. 2) I remembered watching an arresting episode of the History Channel's Life After People about the White House and what would happen to it if it were left in utter neglect. And 3) I realized that I had Washington, V.C., Vamp City, which was just too perfect to ignore. Here's the link to the History Channel's Life After People video of the White House, in case you're interested in seeing it for yourself. The big difference in what would happen in the real world and in the Vamp City world is the foliage. Plants don't grow without sunshine.

One more interesting tidbit about this book. In my first draft of A Blood Seduction, there were no trees. None at all. Again, where the sun never shines, plants won't grow, right? But I didn't think to mention that fact to the editorial team running the cover conference on my book and when I saw the cover, there were trees. Glorious, atmospheric, wonderful trees, and I knew I had to have trees in my book. So in the final draft, I added them. Dead ones, yes, but lots and lots of trees.

“Palmer’s taking no prisoners with this gutsy new series. I devoured this book in one day. The second book can’t come soon enough.”

“This book is definitely one of the best series starters I have read in a long time! All hail Pamela Palmer! An author goddess in the making!”

“Ms. Palmer has begun an epic story with A Blood Seduction. I could see all the unanswered questions at the end and I can’t wait to find those answers in the next Vamp City novel.”

“A Blood Seduction hooked me right from the start with a different twist on the whole vampire trope, and I couldn’t put it down.”

“A Blood Seduction is a great Dark Fantasy for those who like dark violence and a little twist with vampires living on a parallel world. The world building was fantastic.”

“The writing is superb, the world that she build’s (Vamp City) is a take no prisoner, no hold’s bar fantasy land, and the characters are well fleshed out. I’m on pins and needles for the second book.”

“I read something outside of my genre comfort zone, way outside of it and I loved it. There were so many things that I utterly enjoyed about A Blood Seduction.”

“Deliciously sinful little treat. I can’t wait to see what Pamela Palmer does with book two in the series.” Rating: Five Hearts

“Arturo is one hot vamp! This Dark Urban Fantasy with a light touch of romance is the first of this series and is expected to have at least 5 books. I cannot wait to devour each of them as they are released!”

“With A Blood Seduction, Pamela has proven herself the writer extraordinaire. A Blood Seduction is a unique, extraordinary, and exquisitely mind twisting paranormal that will have you thinking about sleeping with the lights on – if you sleep at all.”

“A great start to a dark new series. This book left me craving more.”

“The world was original, creative, dark and I want to know more… A Blood Seduction was a great beginning to a dark and dangerous world and I cannot wait to learn more about it.”

“A Blood Seduction was an entertaining read. I’m really looking forward to reading the next book in the series.”

“I can’t wait to read the next book in the Vamp City series.”

“Wow. That’s all I have to say on this wild ride of a story. I could not put this book down. It was a joy to read and kept me riveted to the pages with every twist and turn.”

The Roux Perspective ~ posted May 2012

“Action-packed and steamy this vampire horror will have you longing for the next installment.”

“For as many vampire novels as I have read, it really is an accomplishment to come across one that feels completely unique. A refreshing and rather compelling read. With sexual tension that oozes off the pages and extremely high stakes, A Blood Seduction cannot possibly disappoint.”

“A Blood Seduction is a terrific start to a new series. The story is amazing. It’s full of mystery, action, romance, intrigue, and well-developed characters. I can’t wait to see what happens next in Vamp City.”

“Pamela Palmer’s stories catch you, captivate you, and never let you go.”

“A Blood Seduction is a wonderfully intriguing and chilling launch!”

“An amazing, action-packed series! I’m as hungry as a Vamp for the next book!”

Kerrelyn Sparks, NYTimes bestselling author of the Love at Stake series. ~ posted May 2012